When I first started CT 101, I had a false expectation that was a bit exaggerated:

Of course it can’t be that bad, if it was, I’d definitely wouldn’t be the same if it were:

But now, I realized it ain’t so bad

Blogging and making gifs? Sounds good to me, how hard can it be?

I shouldn’t tempt fate like that, but hey! Prefer this as my first class! The professor seems cool enough and is pretty patient enough.

Hi, my name is Marvin Matias. One of the things that make me happy from the internet is the usage of screenshots and gifs of people’s favorite shows or cartoons as sort of reaction images. This is something that can be commonly found in any part of the internet, mostly if you visit social media sites like twitter or Instagram. A lot of this enjoyment stems from how a simple scene of a character reacting to something or a screenshot of a scene that one stops at can represent a feeling you have that you would find perfect for whatever thing you yourself is reacting to, such as the gif below.

It’s especially funny when it’s altered in a certain way to become something else, such as below! 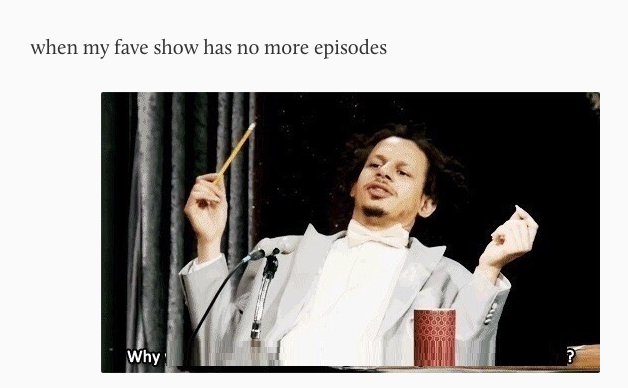 It’s all about seeing something funny about your favorite media didn’t realize before hand! This is also a representation of how I, as a person who spends plenty of time on the internet, just loves memes at the end of the day. They make me laugh and have always proven themselves as a legitimate form of comedy to me.

Another thing that makes me rather happy is going on YouTube and watching videos from a channel called ‘Great Big Story’. I’m a big fan of their shorter videos where they simply talk about one aspect of a culture’s traditions, whether it’s in their food, or to craft of theirs that isn’t looked at as much. It makes me happy for the simple fact that I get to learn more about other cultures that isn’t in everyday conversation and it creates this great identity we can appreciate. For example, this video about a debate between the French over the name of chocolate filled croissant! Is it pan au chocolat or chocolatine? No clue

Alternatively, they also have videos about none food related things, such as the one below about Ireland’s national sport, Hurdling: