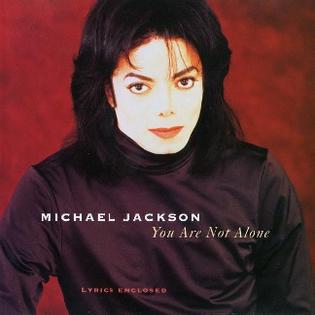 Did you know that Michael Jackson’s single “You Are Not Alone” from the album HIStory: Past, Present and Future, Book I was the first song ever to debut at number one on the US Billboard Hot 100 chart?

Yes Gaga, Britney, Beiber, Lauryn Hill, Aerosmith, and others have done it, but Michael was the first to do it, and that makes it all the more legendary!

Of course this makes him the first male artist, as well as the first black artist to do so. The King of Pop himself!

This song is just one of the timeless hits by Michael Jackson. It was also his last single to reach number one on the Billboard charts in the US. It was written and produced by R&B veteran, R. Kelly in 1995. I know his moniker is “The King of Pop,” but this song is straight up R&B influenced, with hints of soul. It’s not my favorite song by Michael, but I must admit his vocal delivery is exceptional and praiseworthy!

Here’s where I got the single and album artwork from:

Wikipedia: You Are Not Alone and History: Past, Present, and Future Book I