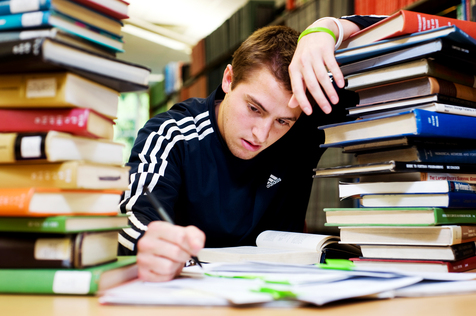 Entering college is an enormous accomplishment, for students looking to further their education. But with higher education comes more responsibility. Choosing classes, working, and figuring out what major you want to pursue to lead you into the career of your dreams is enough to stress any one out. A new study shows that stress is actually a good thing and can lead to higher levels of productivity.

Stress is part of the body’s fight or flight response, which is nature’s survival mechanism. This is meant to protect you not harm you. ABC News reports that Low-level stressors stimulate the production of brain chemicals called neurotrophins, and strengthen the connections between neurons in the brain. In fact, this may be the primary mechanism by which exercise a physical stressor, helps boost productivity and concentration.

“I am a full time student as well as work at a daycare, stress is all around me, but I’m able to take that and still get everything done,” said Renelisa Guerrero, 20, a second semester freshmen at York College, who has yet to declare her major.

Stress is usually referred to as unhealthy but a new study at the University of Alabama Birmingham shows that stress can be good for strengthening the connections between neurons in the brain, and help a person become more productive.

The latest update from the American Freshman: National Norms surveyed more than 150,000 students nationwide from the entering fall 2014 class. The survey found that 9.5 percent of respondents had felt depressed upon entering college. During the past year there has been an increase of over 6.1 percent of college freshmen who feel stressed out. Students who felt depressed by schoolwork, and holding Jobs rose to 34.6 percent from 27.1 percent.

“short- term psychological stressors can be a good thing, some studies have shown that stress can increase your ability to memorize better,” says Psychologist Dr. Tiffani Elis a high school guidance counselor from Brooklyn New York. She also adds, “This is why some students don’t mind cramming for tests. The stress helps them focus and not be distracted because they have a limited amount of time and an end goal. Not that I advise students cram for tests.”

Some high school seniors can transition to college freshmen with ease.

“I don’t find it too stressful yet, setting my own schedule was different, and the professors have a different sort of presence, but that’s all I see as the real difference right now,” says Marc Torres, 18, an english major and first semester freshmen at York College.

Eustress also known as good stress makes you think and act more effectively to manage the situation better according to research done by the Department of Psychiatry at the University of Alabama Birmingham. You are being driven and motivated through your stress. Chronic stress is an overwhelming reaction to stress and can occur due to every day stressors. Chronic stress- stressors maybe irrational to some but for college freshmen who are not use to the pressures that come with college it is a very common response.

Psychologist Dr. Tiffani Elis says “that it is important to take time out for yourself. Students who enter college think that they have to be in control of every little thing which is not the case.” She also adds “You should create realistic expectations for yourself, as well as make a schedule for school work, study time and jobs, so that you don’t feel so overwhelmed. This makes you aware of deadlines, so nothing sneaks up on you”.

Stress only becomes harmful to your health when it becomes constant and uncontrollable, but keeping a schedule and carving out time to relax or socialize with friends should help ease the stress and transition to college life.

“There’s good and bad stress, you just have to learn to deal with it,” says Marc Torres.