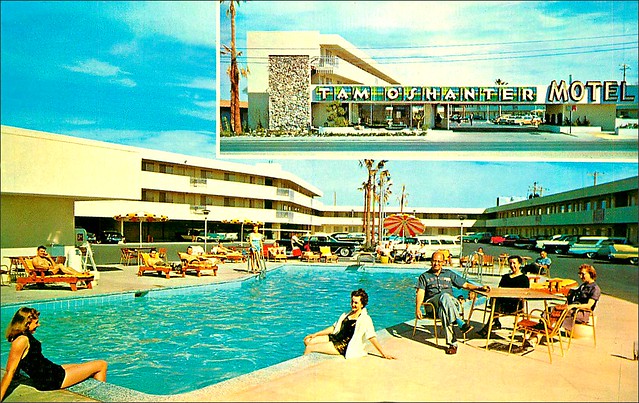 I find the 1950 unlimited photo stream quite interesting  because it features many hotels from the 1950’s. The fact that someone  archived something that interesting gives me an idea to quit having all those photo books made of our vacations which we do a lot and find a more digitally efficient way to preserve our family memories.  One of my favorite things to do is go on vacation with my family. We have visited many different hotels, but has never visited  Las Vegas. This artifact from the collection of the hotel with pool just brings back some great memories of our family vacation.

Tam O’Shanter Motel; Las Vegas, Nevada  was closed and demolished  in 2004. The motel was built in 1957 or 1958 by  owner Bernie Zeldin. He moved to Los Angeles in 1931 and later to Nevada a short time later. He built two other hotels, The Vegan and the Jackson in down town Las Vegas. He later built the Tam O’ Shatner Motel which he owned and operated until his death in 1997.

On the fabulous “Strip” in Las Vegas, between the Sands and Dessert Inn Hotels, Tam O’Shanter stood  out as one of the most magnificent of all resort motels. Free T.Vs–Phones in every room–Steam Heat–Cooled by refrigeration–Show reservations–Heated swimming pool was located at 3317 Las Vegas Boulevard, South.  It is fascinating that the history and legacy  of such a famous landmark can be accessed today  in 2015. I recommend that you read more about the Tam O’Shater Motel, which although it no longer stands erect, we can read about it and see pictures of it 58 years after it was first built.