Platform – Creative Musings on Mass Transit is an exhibition series created by The Transit Museum which invites artists, writers, and performers to reflect/respond to NYC transit and the innumerable emotions and stories that arise when New Yorkers think about the subway. If you’re not from NYC, one way you might be able to appreciate […]

Platform – Creative Musings on Mass Transit is an exhibition series created by The Transit Museum which invites artists, writers, and performers to reflect/respond to NYC transit and the innumerable emotions and stories that arise when New Yorkers think about the subway. If you’re not from NYC, one way you might be able to appreciate the way a New Yorker feels about traveling from point A (Penn Station, Manhattan) to point B (Dekalb Ave Brooklyn) – on the weekend – is to look at this map with it’s blinking limited service and translate that into feeling like this. But that is the utilitarian often-not-servicable workaday relationship a New Yorker has with the subway when traveling the five boroughs.

Then there’s riding a 1924 subway train that showed up December 17th, 2011 at Rockefeller Center, where I would never have been unless family was visiting from Georgia (NYers don’t normally do the Rock and the Big Tree). A dozen vintage cars coasted into the station replete with wicker seats, retro advertisements, and yes people in period costumes. They played swing music and open fan blades spun perilously above my head. It was one of those only-in-new-york moments that remind you what’s so interesting about living in a city with eight million others – all of whom have a story to tell about riding the subway. Each day in transit one might see a group hip-hop dancing on the platform or a congo drumming performance inches away – there is always someone busking on every trip you take.

And though the days of crazy graffiti’d trains are long gone, street artists still find ways to make their mark in this underground universe. I have an affinity for the cut-ups of advertisements pasted in the stations. The poster is usually the top layer of many, many old ads beneath. And through a combination of revealing and repasting there is some great commentary on the original promotional message.

Artist Ryan Seslow has roots in street art, and I was lucky enough to meet him through York College where I work full-time and he teaches a foundations 2D course. We’d chatted a number of times, and finally had a chance to work together when we broadcast a live-stream artist talk for a web-based video show he curated last year.

Ryan has also been creating a good deal of animated GIFs recently, often based on the pantheon of images he’s been creating and reworking for years. Our shared affinity for GIFs led to a collaboration with two other artists called GIFFight!!! It’s a Tumblr project to which we post a still image and challenge each other to animate the crap out of it. The site was featured by Giphy.com as a special post in their regular featured GIF artist series.  One particular challenge latched onto The Tate Britain’s hosting of a “1840s GIF party” which was an open call for submissions to transform artworks from the 1840s room at Tate Britain into animated GIFs. We saw our largest number of GIFs created for a particular challenge – I personally rocketed a sheep out of a meadow and turned a priest into Ray Charles.

The idea of a large institution like the Tate inviting the public to remix with their blessing, images from their archives is an incredibly forward thinking move for a museum. It fosters a connection with the public by allowing them to see culture and its artifacts as part of a continuum. Art, music, books, film are valued resources to be reimagined and reworked and we are lucky that the Tate would celebrate this with the open call, followed by an evening show to present the GIFs. Which was quite clever, as a number of televisions displaying the remixed pieces were placed in the center of the gallery of 1840s painting collection. The glowing TVs were looking at the paintings and almost speaking to them saying, “look what you’ve become!” 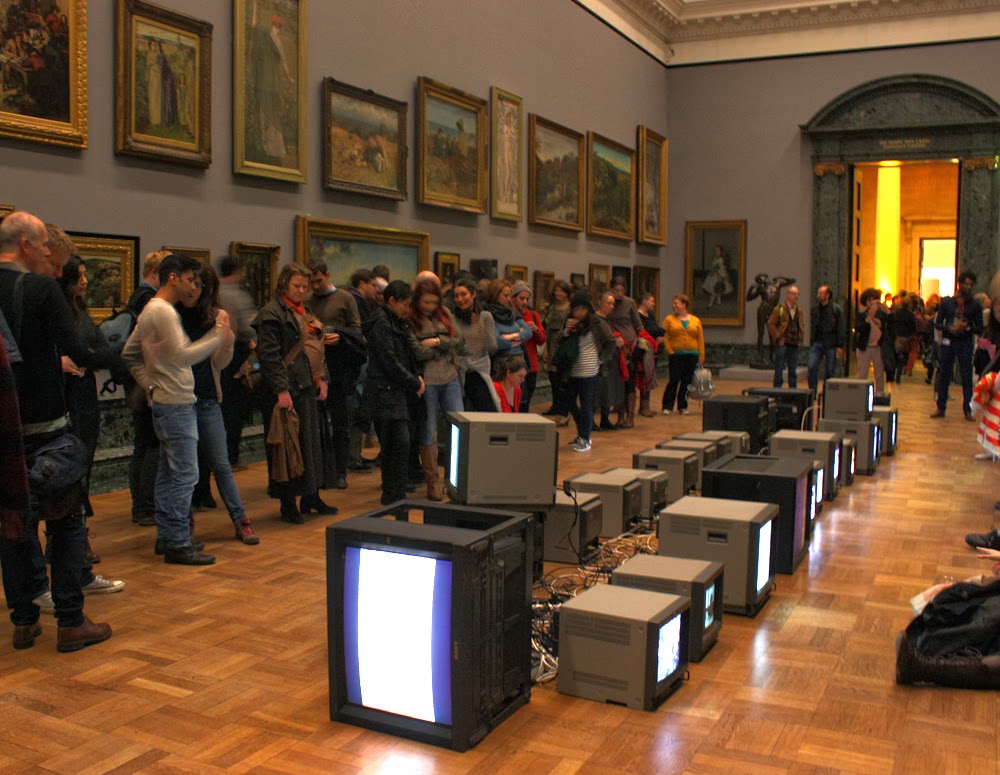 Ryan Seslow was inspired by this event and we’re so lucky he applied to the Transit Museum’s call for artists. The museum staff were struck by the uniqueness of his proposal which was to ask permission to sift through their photography archive and use images to create GIFs. No other proposals made explicit a desire to work with the museum’s collection. The idea of an open call for GIF making was presented as well, which will hopefully happen this fall. And of course Ryan being the generous collaborator that he is, four other artists came to mind including myself who he felt confident would be willing to contribute to the project.

With the support of the Transit Museum, Alice Arnold, Eileen Macavery Kane, Katherine McInnis, Ryan Seslow, and I all dove into their archive to find historical visual nuggets of interestingness. The elevated track shadow piece at the top of this post was one of the first ideas I had, but the last GIF I finished because it took so long! A total of twenty-two GIFs were made by the entire group and on the evening of June 25th they were projected onto two walls on the station platform amongst the various vintage subway cars on display. Many don’t realize that the museum is actually a decommissioned train station with a live third rail. Seeing the GIFs amongst all the trains can lead people to believe that it was done at one of the working stations.

Ryan, Alice, Katherine and I were able to be there that night and people really responded to the installation as well as appreciated the inspiration for the project. Ryan was quoted in the New York Observer musing about what happens on mass transit in New York, describing how “You’re sharing that place with a lot of people simultaneously… You’re going to connect. You’re going to feel something.” And it’s so true, though those feelings may not always be the most positive – like when the train comes to a stop between stations, followed by a garbled message of an explanation, then the lights go out, it begins to get hot… Just ask any New Yorker about this situation and they will have a story! But they will also have a story that describes what they love and romanticize about the train system. It is so woven into the emotional fabric of the city and it’s inhabitants. New Yorkers practically have a Pavlovian response to the sound of the train entering the station – Always relief. Though there will likely be some unintended by-product of your travels, you will get to your destination and you will have another story to tell.